Act One, Scene One

At the Gates of Duskendale 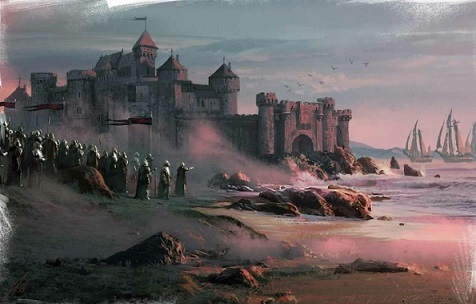 As many of you bed down or make your way to bed in the aftermath of the sack of Duskendale, you pause to think on the events of the last three hours. Rivington and Kaiden, both seeking an audience with the Hand of the King were disappointed to learn that such auditions were over as Ser Barristan Selmy had already scaled the walls, snuck into the dungeons and rescued the King with minimal loss of life. Though their hopes were temporarily dashed, it soon became clear that opportunities were everywhere as the siege turned into a sack, with soldiers pouring through the west gate, seeking rapine and fortune.

Meanwhile, Esja, had her inquiries answered unexpectedly as she was joined by the Prince of Dragonstone who seemed as interested in her as she had been in him. They spoke briefly of dreams and dragons and higher mysteries but the sack drew them to the North Gates and another way into the city. There, they encountered members of the Golden Company including their captain, Content Not Found: placeholder-robin-s-character, who was already fast at work cutting through the thick doors.

Zia posted a new aquintence,Corenna, at the gate to make sure anyone who fled the city north was accounted for. The Witch soon found herself with other problems, however, as a fainting spell came over her and she awoke having written the words “The Waters” in the mud of the encampment.

Within the city walls, Esja, spied on the smallfolk, while Zia and company made their way to the walls of the Godswood to attempt to outmaneuver the Hand of the King and his forces, intent upon the the capture of the Darklyns. They scaled the walls along with Kaiden and discovered, Lord Denys’ Lady wife, Serala of Myr, attempting to escape. Zia sent Myles Toyne with the traitorous Lady back to their encampment while they looted what they could in place of absconding with more Darklyns or Hollards.

Outside the city, Mellaro and Allyria were becoming fast friends despite the attempted intervention of Mellaro’s chaperone, Corleo. When they encountered Rivington and the Prince outside the Lannister tent, Mellaro begged an audience and was granted one the following day. Esja’s mustelid reconaissance gleaned that the King had been injured, cut and bled at the very least, by the Darklyns and that tensions between him and his heir had decidedly escalated. Rivington was also granted an audience after binding up Rhaegar’s hand, and all went to bed somewhat satisfied in having gained the Prince’s ear. It is currently nearing midnight on the ninth day of the tenth month of the 277th year since Aegon’s Conquest, the end of a long summer, and you are all in good health.

The Siege of Duskendale 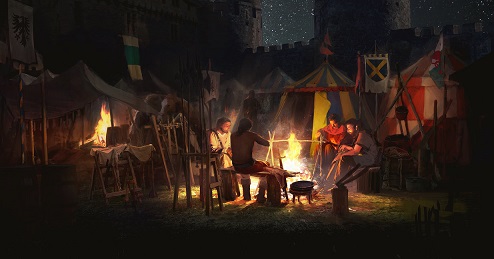 As some of you make your way to the siege encampment outside the walls of Duskendale, while others, already arrive settle in for another long night amongst its guttering torches and myriad cookfires, you pause to think on what brought you to this point. Some of you crossed oceans to be here while others hiked barely twenty miles. You’ve come for different reasons, some seeking the king’s favor to advance your station, or to restore a title that was lost to you. Some are merely curious to see these otherworldly royals up close and find some affinity, still others seek to secure riches, establish trade, or resolve some other business, long in the making.

Behind the walls of Duskendale, a king sits in chains, being ransomed for rights that couldn’t possible justify the foolishness of the attempt. And while the smallfolk of the city remain eerily quiet, the bustle of the encampment grows daily as petty lords, hedge knights and ambitious squires pledge their swords to the silver haired Prince and the golden haired hand that rule the kingdom from tents in the mud.

It is an hour after sunset on the tenth day of ninth month of the 277th year since Aegon’s Conquest, the very end of a brief summer, and you are all in good health.

Welcome to your campaign!

A blog for your campaign

Wondering how to get started? Here are a few tips:

Invite them with either their email address or their Obsidian Portal username.

Make a few changes to the home page and give people an idea of what your campaign is about. That will let people know you’re serious and not just playing with the system.

If you want to set a specific mood for your campaign, we have several backgrounds to choose from. Accentuate it by creating a top banner image.

Characters form the core of every campaign, so take a few minutes to list out the major NPCs in your campaign.

A quick tip: The “+” icon in the top right of every section is how to add a new item, whether it’s a new character or adventure log post, or anything else.

The adventure log is where you list the sessions and adventures your party has been on, but for now, we suggest doing a very light “story so far” post. Just give a brief overview of what the party has done up to this point. After each future session, create a new post detailing that night’s adventures.

One final tip: Don’t stress about making your Obsidian Portal campaign look perfect. Instead, just make it work for you and your group. If everyone is having fun, then you’re using Obsidian Portal exactly as it was designed, even if your adventure log isn’t always up to date or your characters don’t all have portrait pictures.

That’s it! The rest is up to your and your players.