As woman with no formal training in combat, Zia Faydig’s prominent position as the right hand and most trusted advisor of Callum Rivers, a high ranking officer in the Golden Company and distant bastard off-shoot of House Blackfyre, is a novelty that has long perplexed the Golden Company’s own ranks and the Free City clients with whom she frequently deals. Her Rhoynish features (she was born an Orphan of the Greenblood) and her ornate armor, complete with specially molded golden-breast plate, have led many a new recruit to derisively conclude that she must some kind of mascot, a pet Rivers keeps from some odd sense of amusement or affectation. “She looks like an actress playing Nymeria in one of those old Dornish founding pageants,” a petty officer once sneered, and the nickname “Nymeria the Younger” was immediately coined and circulated. However, this flippant first impression quickly dissipates in the face Rivers’ absolute confidence in his unorthodox lieutenant. Not only does he openly solicit her advice in all things – whether tactical, political or financial –almost always taking the course she recommends, Rivers also routinely delegates both field operations and contract negotiations to her, which has led more than one observer to suggest that she is the secret to his own meteoric rise to high command. And while it’s true that Faydig has never been a formidable warrior (by necessity barking orders to units from horseback rather than trading blows herself), her mount never fails to appear where the fighting is thickest. Indeed, her sangfroid and deft tactical maneuvering have been credited with turning more than one imminent defeat into victory, and she has earned the iron loyalty of most of the men who’ve served under her command. As a result, the nickname “Nymeria the Younger,” despite its mocking original intent, has now been imbued with genuine affection, and it has attached to Faydig like a brand. Rivers in particular encourages its use through out the Company and the Free Cities to increase his protégée’s reputation and mystique.

In recent years, however, suspicious murmurs regarding her have been growing among Company members outside of Rivers command, where dark insinuations over glasses of wine usually gravitate to the subject of her obscure origins. True, it’s well known that she is an Orphan of the Greenblood and initially came into the orbit of the Company through Heron Groat, a thuggish lout (even in the estimation of his friends) who had acquired her as a slave while freelancing in Dorne after the War of the Ninepenny Kings. But, after Groat’s assassination while on duty in the Disputed Lands, what mysterious twist of fate compelled the young Callum Rivers to take the waif under his wing and sponsor her for membership? That Rivers and Groat had been bitter rivals for advancement in Rivers’ early career smacks of more than mere coincidence. What’s more, notwithstanding her lucrative service to the Company for many years, a fact to which her richly bejeweled armor and weaponry once attested, several members have noticed long, unexplained absences during campaigns near the Rhoyne recently, from which she often re-appears with one less jewel (or ring or chain) than when she left. Even her own soldiers cannot fail to notice how Spartan (by Golden Company standards) her appearance has become in the past year. Indeed, even Rivers has given a winking acknowledgement to his second’s growing austerity on occasion, but if he harbors any serious doubts about her motives or capabilities, they have yet to manifest in his actions or speech.

Most recently, Rivers’ own forces have begun to question his decision to serve as the Company’s envoy to the siege at Duskensdale and whether this decision owes something to Faydig’s overbearing influence. Predictably, when the news of King Aerys’ capture first reached Essos, the Company saw the potential for profit and decided to send two representatives to the Crowlands: one to the Targaryens and one to the Darklyns, with services going to the highest bidder. Callum had been consulted and supported the plan, but he had initially demurred from participating in the venture himself: “Recent history has shown that a man of Blackfyre blood (even the diluted amount I possess) should steer clear of the Targaryens; but by all means, let other members profit by it.” There the matter had rested, until one night, Rivers emerged from his chambers, manic and wide-eyed, calling for Zia to attend him at once. No one knows what was said during this twilight conference, but the next morning Rivers sent a message to the Company’s high command announcing (in a tone of resolution rather than request) that he and a band of his choosing would travel to Westeros to negotiate a contract with the King’s Hand. He also guaranteed (though he failed to explain how) that he would secure extremely generous terms from Tywin, but only if the Company refrained from simultaneous negotiations with Denys Darklyn. To be sure, the Company’s leaders were struck by Rivers’ impertinence; but seeing that his mind was fixed, they coldly acquiesced to avoid internecine squabbling (which was always so bad for business in times like this). So when Rivers finally announced to his troops that he, Zia and a handful of officers would be sailing to Duskendale on the next tide, confused glances were exchanged up and down the lines.

Now on route, the petty officers of the party note that the breezy camaraderie usually attending such journeys is conspicuously absent, with Rivers holed up in his quarters while Faydig stands brooding upon the ship’s bow – her mind clearly already in Westoros and impatient for her body to follow. “Nymeria crosses the Narrow Seas once again,” one of the officers good-naturedly quips to her and asks, “Be direct with us, Zia. Why has Callum changed his mind? Why risk the ire of a Targaryen blood feud?” Slowly, she turns her head and fixes her onyx eyes on his, whereupon the officer feels the breath drain from his nostrils and the blood stop in his veins. This is not a new experience for him. Many men in Rivers’ company, through either incompetence or insubordination, have found themselves on the other side of this withering glare. But at this moment, it does surprise him. After all, he had just asked an honest question. “I am not at liberty to say” she finally responds, “and you are not at liberty to know. Leave it at that.” With a nod, she returns her gaze to the horizon and releases the officer from his stupor. “And another thing,” she croaks, her eyes still fixed upon the distance, “tell the men to stop using that name. I’m no Nymeria. Never have been. Never wanted to be.” 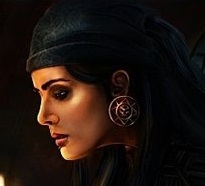