Brave and Storied Knight of the Kingsguard

A knight renowned for his bravery and chivalric mien. Still spry and hale at forty.

Ser Barristan is black of hair, though the first signs of gray are beginning to appear, with a kind face and stunning blue eyes. Though he is nearing the autumn of his life, he retains a youthful vigor and respectful but companionable nature.

Barristan was born the first son of Ser Lyonel Selmy, the Knight of Harvest Hall. He squired for Lord Manfred Swann in his youth. At the age of ten, Barristan donned the armor of a mystery knight and entered a tourney at Blackhaven. Prince Duncan Targaryen took pity on the small mystery knight while others laughed. Duncan jousted Selmy when no one else would and it was Duncan who gave Barristan his epithet.

Barristan received his knighthood at the age of sixteen from King Aegon V Targaryen after unhorsing Prince Duncan and Lord Commander Ser Duncan the Tall of the Kingsguard at a tourney in King’s Landing. An eminently successful tourney knight throughout his career, he also proved his worth on the battlefield. During the War of the Ninepenny Kings Barristan slew Maelys the Monstrous in single combat, ending the male line of the Blackfyre Pretenders. Selmy had to cut a bloody swath through the Golden Company just to reach him. His actions led the remaining members of the Band of Nine to abandon the Stepstones and lose all interest in Westeros. His deeds gained him undying fame and his name was well known throughout the Seven Kingdoms afterwards.

Barristan was named to the Kingsguard at the age of twenty-three and swore his vows before Ser Gerold Hightower, when King Jaehaerys II Targaryen bestowed the white cloak on him. In joining the Kingsguard, he gave up the claim to his family seat, and the girl he was to wed was married to his cousin instead.

Three years later when Aerys II ascended the throne, Ser Barristan was regarded as the most gallant and handsome of a kingsguard that already included living legends like Arthur Dayne, Oswell Whent, Gerold Hightower and Lewyn Martell. 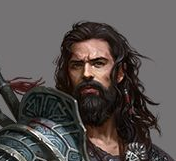