At Two and Thirty, Hugo is not as hale and hearty as he once was, though he still maintains an impressive physique, turning softer bit by bit. He has long blonde hair and a pointed beard.

Ser Hugo Brax grew up at his family’s keep in the Westerlands. Life at Hornvale was one of constant excitement, what with his family riding out when he was a twelve squire to battle the Ninepenny Kings and, later, when he had come of age, participating in the many tourneys at Fair Isle, Riverrun and Pinkmaiden. While his cousins, Andros and Rupert Brax were groomed to be the future Lord and Castellan of Hornvale, Hugo knew that Knighthood might win him greater glories on the field of battle and in the hearts of maidens beside the tourney grounds. Alas, Brax never quite proved the equal of the great knights of his childhood, especially Ser Barristan Selmy, whom he saw slay Maelys the Monstrous in single combat. This slow feeling of disappointment continued on as his thirtieth birthday approached and he began to see knights and squires half his age who were far better swordsmen. 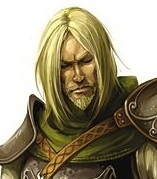