A Hedge Witch of Hexwood

Corenna left an unpleasant home at age 15 with a small amount of supplies and basic knowledge of healing herbs (knowledge gained by bribing local healers to teach her). She eventually made her way to Hexwood on Cracklaw point and sought out one of the famed Hexwood witches.

Such women were famed on both sides of the Bay of Crabs as healers and seers who learned their art from the Children of the Forest. Corenna found that most were women like herself—independent-minded, in need of isolation, and skilled at healing. They did not learn their art from the Children of the Forest, but from one another, passing down herb-lore from generation to generation, and welcoming new hedge witches into the fold. Some believed in prophecy, wargs, and other nonsense, but most were surprisingly pragmatic and when the fishermen said “spell,” Corenna knew they meant “poultice.” Nevertheless, Corenna has always viewed her knowledge as her main source of power and safety in the world, and as such she pays close attention to any stories, including those of seemingly-improbable magic, that she believes may eventually be useful to her—even if only to tell inquiring visitors in exchange for things she needs.

She used the rest of her silver to buy an apprenticeship from a particularly feared witch that the locals called Bog Bessie. Her shack stood upon a small island in a peat bog on the south end of the Hexwood with Pine Barrens extending for miles below that. Most locals only sought her help in the most desperate of times, and otherwise said that she commanded subterranean armies of squishers and ensorcelled young boys to take as her slave lovers. Correnna found her pragmatic, shrewd, and funny. She spent six years further honing her healing skills under Bessie’s tutelage and, when a fever carried the old woman off, Corenna took over the practice. She offered abortions, amputations, pain relief and healing salves to those brave enough to beg the “New Bessie.”

Ten years after running away, Correnna might have thought the exciting part of her life was over were it not for the strangers in town. Two years ago, other Hexwood witches began to talk of strange men who came in search of strange answers to strange questions. Cloaked, hooded and sometimes masked they asked about squishers, and spells and higher mysteries. These were all normal topics for the witches of Hexwood, they were asked similar questions by superstitious old fishermen and wide-eyed children. But something in the earnest manner of these men gave most pause. Correnna was approached twice but neither time did the questioner seem satisfied with her lack of answers.

Then the disappearances started. First an old woman in the community simply vanished and others assumed she had died out in the woods or drowned in a pond. But more and more witches disappeared and until Corenna found herself meeting with only about half the women their community once boasted. She was approached by one of them, a seer named Wynafrei, who spoke of dark times ahead. Corenna had never seen anything in her life that said that darkness was anything but the work of dark minded men and she said as much to Wynafrei who asked for her aid in casting a protection spell. But soon after that refusal, Wynafrei was gone as well. Corenna was almost all alone.

And three months ago, she decided she would find answers herself. She packed up the essentials from Bog Bessie’s shack and followed the rumor trail south, down the peninsula, to Duskendale, where the rumors stop and a King is held in chains. 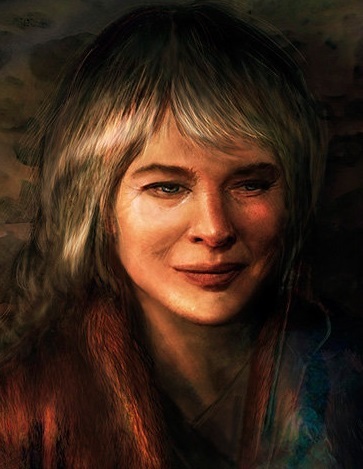