Age: 18
Religion: follower of R’hllor
Appearance: Dark skin, shoulder-length dark brown hair with large green eyes. Medium build. Quicker than she looks.
Wounds: A deep knife wound in her shoulder, currently does not have use of her right arm.

“Allyria” is a Faceless Man, apparently originally male, and of a background unknown, now even to themself. The history of Allyria of Myr, apparently a deceased woman whose identity was taken by the guild is as follows:

The third daughter (and fifth child) of a middling merchant family in Myr, Allyria was another mouth to feed in terms of her family, and with two elder brothers set to inherit, her parents gave her up to the red priests at the age of seven. Once there, she proved an adept pupil, and it turned out to be rather helpful to have a devout young child around to convince the masses of the rightness of R’hllor.

A bright and earnest child, she learned quite early how to convince people to at least stay—just a few more minutes—this, this story is the one to listen to—which lead to a higher-than-usual conversion rate, even in the hotbed of R’hllor activity that is Myr.

The Red Priests soon learned that while charismatic, she failed to have the ability to be a priest, and, in an interest in diversifying their interests, set her up to be apprenticed to one of the merchant guilds in Myr—thus creating a new source of income as well as converts. This proved to be an ideal arena for her, and she has in recent years become a valued member of the Palace of Eyes, expanding their trade throughout the Free Cities, her Red Priestess beginnings all but forgotten by most.

Now, the Priests look to Westeros, and so she heads to Duskendale to make connections across the Narrow Sea, and, R’hllor-willing, sell some of her Myrish glass and lace she’s brought along. 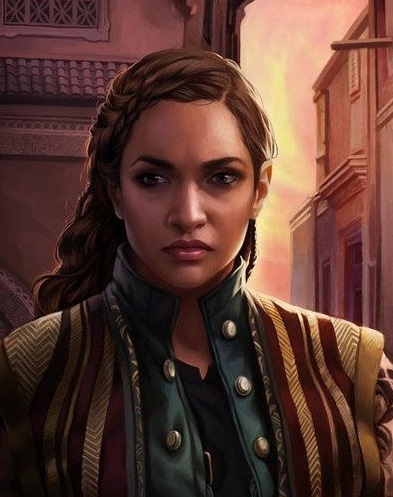